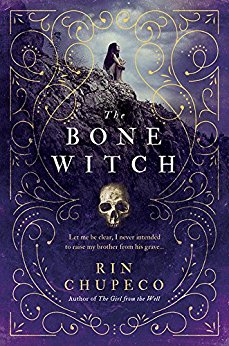 Tea’s grief over her brother’s death brings her to do something her people abhor: bring him back from the dead. Soon after, a bone witch, Mykaela, arrives to take her from a village that now fears her. She takes, Fox, her brother, with Tea. Tea learns that her brother has become her familiar and she is known as a dark asha.

Mykaela takes her to her mentor to train but the old lady refuses her until she can pass the oracle’s test. Tea is confused by her test and what she learns. Mykaela’s mentor takes Tea in but only as a servant. Tea bides her time until another asha tricks her into performing for the prince and his friends. Tea feels strange and before she knows it, she resurrects the dead king along with an army of rats and other things.

Her powers bring her house prosperity and so begins her training. She is taught many things from flower arrangements to self-defense, to dancing and music. She does not excel at everything but she is good enough is enough things to please her mentor. Meanwhile, Fox begins to disappear and reappear with bruises and wounds. She thinks he’s involved in something illegal.

There are creatures that terrorize the country, dark monsters raised by the evil sorcerer who killed the good creator, his brother. The dark asha are the only ones strong enough to fight them. But Mykaela is dying and Tea tries to protect her. Can she find a way to save her mentor and bring honor to her house?

This is an awe-inspiring book! I LOVED, LOVED, LOVED the world! The characters were complex and flawed. Tea is neither all good, nor all bad. The other characters around her show the same level of depth. The plot was straightforward once decided upon. The story is interweaved from the future to the past with both Tea’s p.o.v. and another, who is there to tell her story.

There were some confusing parts in the story, times I didn’t know who was speaking and they pulled me out of the narrative a bit but I quickly found my place again and these didn’t happen often. This is the first book in the series and I look forward to reading more from this author. She has such a captivating voice!