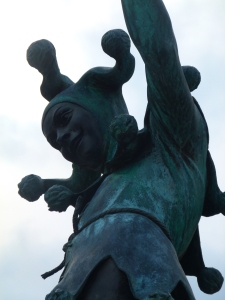 The king finished scrutinising his appearance in the full length mirror with a satisfying ‘gurgle’.

It was, decided the king, now perfect!

All that remained to be done… was to wait.

The crowds were already pouring into the capital from all four corners of the realm.

The minstrels and street entertainers had been plying their trade since before the early hours.

The advance guard of flag wavers would soon be pressing their features to the railings which surrounded the royal palace.

‘They enjoy waiting’, thought the king, ‘it adds to the suspense. Even in the rain, and one ought really to be fully rested before such an event. One should take a little nap. It would hardly matter if one overslept…